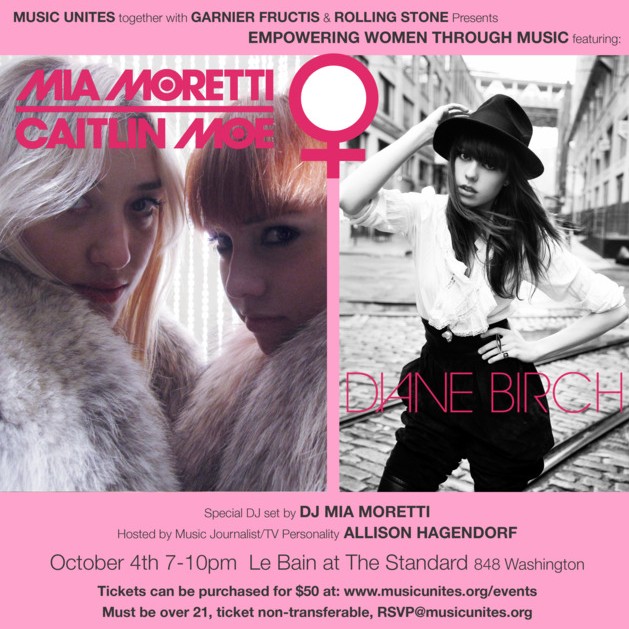 Diane Birch is a singer songwriter currently living in Brooklyn, New York. Her debut album Bible Belt serves up her own portrait of American music in all its breadth and majesty, touching down on Beale Street, Bourbon Street, Tin Pan Alley, Laurel Canyon, South Philly, Brooklyn street corners and many points in between. The album has been considered a tour-de-force and her goal is to empower other women through her music and message.

DJ Mia Moretti is a permanent nightlife fixture at some of the country’s hottest events and venues.  She has performed alongside popular musicians such as Courtney Love and Snoop Dog and recently played Chelsea Clinton’s wedding. Her remix of Katy Perry’s hit single “Hot N Cold” landed on the Billboard Dance Music Charts for 10 straight weeks, and her remix of “Peacock” is featured on the Perry’s latest album “Teenage Dream.”

Cailtin Moe began playing violin at the age of 4, but was later criticized for being
too animated and too interpretive with her classical selections, which soon led her to discover songwriting and the infusion of strings with other genres. Fresh off the 2009-2010 west coast tour with multi-platinum selling arena rock band Trans-Siberian Orchestra as their featured electric violinist, Moe has currently been touring with DJ Mia Moretti, exploding out of the ordinary classical violin and electrifying audiences in hotspots across the country.