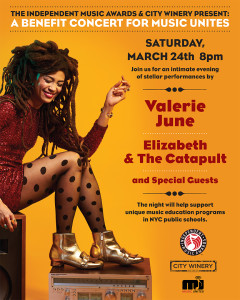 Since the release of her 2013 breakout, IMA Winning album Pushin’ Against A Stone, Valerie June has been patiently at work in the garden of song, nurturing seedlings with love and care into the lush bloom that is her stunning new album, The Order Of Time, which landed on many music critics’ “best of lists” in 2017.

Some of Valerie’s new songs grew from seeds planted more than a decade ago, others blossomed overnight when she least expected them to, but every track bears the influence of time. See, time has been on June’s mind a lot lately. It’s the only constant in life, even though it’s constantly changing. It’s the healer of all wounds, the killer of all men. It’s at once infinite and finite, ever flowing with twists and turns and brutal, churning rapids that give way to serene stretches of placid tranquility. Fight against the current and it will knock you flat on your ass. Learn to read it, to speak its language, and it will carry you exactly where you’re meant to be.

Elizabeth Ziman, who performs as Elizabeth and the Catapult, is a critically acclaimed singer/songwriter from New York, living and working in Brooklyn. She’s toured​ with the likes of Sara Bareilles​ and Kishi Bashi; collaborated with Esperanza Spalding, Gillian Welch, Blake Mills​ and ​Ben Folds; scored, with Paul Brill, a variety of international award-winning documentaries including Trapped, a Peabody winner; and won the 2015 Independent Music Award for Songwriting, Folk category. Her songs have been featured in national television campaigns for Google, Amazon, Sky TV, and “​So You Think You Can Dance”​.

The beneficiary of this event is Music Unites, a national charity with the mission to raise academic and lifetime achievement for at-risk public school students through the support and creation of unique music education partnerships and programs. The organization currently provides free after-school music programs to youth through school-based partnerships, along with special monthly workshops designed in alignment with standards for career and college readiness. Music Unite’s life-changing programs and events help educate and guide our youth toward planning and achieving responsible goals for their future. Music Unites also leverages its student’s innate talents and elevates the next generation of performers by providing audiences, venues, and special performance opportunities, while at the same time offering its students performances of aspiring artists across a wide range of genres that exist in the increasingly diverse world of music.

More details, and ticket information can be found here:
http://www.citywinery.com/newyork/tickets/the-independent-music-awards-city-winery-present-an-evening-w-valerie-june-w-special-guest-elizabeth-the-catapult-3-24.html